Home Archives Profile Subscribe
Divorce costs and how to reduce them
A mentor in the dark, dangerous art of drafting, a model for lawyers' and law's service to clients and lawmakers

Collaboration borrows some concepts from science and medicine, in which teams of professionals in various fields pool their information and expertise and collaborate to solve problems. A great example of such collaboration in the midst of conflict, in which both sides seek the truth from very different points of view, was reported in the Calgary Sun last week:

"One of the most important fossil finds in decades, helping to solve an evolutionary puzzle dating back 60 million years" ... "comes at the end of a backhoe operated by a man known as the greatest promoter of creationism in Alberta. His name is Edgar Nernberg, and when he’s not sitting on the board of directors of Big Valley’s Creationist Museum or actively lobbying for the inclusion of creationism in Alberta’s school curriculum, Nernberg operates a backhoe in Calgary."

Nernberg found five complete fossilized "bony-tongue fish", about 60 million years old, while digging a basement. “'No, it hasn’t changed my mind. We all have the same evidence, and it’s just a matter of how you interpret it,' says Nernberg. ... 'There’s no dates stamped on these things,' he says, sharing a good-humoured chuckle about a discovery that has him working alongside the ideological enemy. ... Thursday, the University of Calgary will officially unveil the five priceless fish, which might have been chips had Nernberg not noticed them.vIt’s bound to be a very interesting meeting of minds, as Nernberg stands with officials from the university to show off the find." 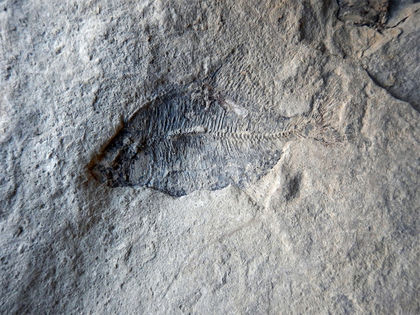