But for me, as a family law attorney, the idea of "Child-Friendly Faith” also raises other important issues that we need to do something about.

Churches have too often been involved in child abduction, alienation, and other efforts to destroy two-parent families after divorce or unwed childbearing. As a Christian I’m horrified by churches’ role in, to take two recent examples from Virginia, the long-term “underground” child abduction in the Miller-Jenkins case, and the grossly false abuse accusations and international child abduction in the McLaughlin case.

Partly, it’s that some faith leaders have not focused their attention on family-law issues, and they still have “legacy” views about them which may have been conservative in earlier generations, but which are now so out of step with the reality of family life, that their effect when put into practice is to combine with the worst of anti-family radicalism -- essentially, to take families that are already somewhat broken and break them even further.

For example, I encounter many people who essentially think that every divorce is really a “fault” divorce. And that the spouse who “abandoned” or disrupted the marriage has thus abandoned the whole family, or should be expelled from it. Or that visitation, and dealing with the reality of having a divorced  or unwed family, is worse for children than losing a parent completely. Or that a parent who doesn’t share their religion should not get to be a parent.

Even though these views are superficially more “pro-mother” and “anti-father” than vice versa, I don’t think there’s anything feminist or liberated about them. In fact, they are usually part of a larger pattern of patriarchy -- grandparents who don’t respect their adult children's formation of a new nuclear family with their spouses, and who treat their grandchildren as the property of the patriarchal extended family, not as individuals with a right to know and live with both natural parents.

It’s not just that some clergy have these beliefs. Those lay people who tend to think that way also tend to seek, and expect, help from their churches.

We need an interdenominational movement to raise churches’ consciousness about healthy ways to deal with divorce and nontraditional families. No, that’s not all that churches should do -- their divorce ministries should not overshadow their fundamental responsibility to support and foster healthy marriages, which has been sorely neglected for generations -- but they also need to stop making divorces worse.

And while it could take some time for churches to decide exactly what to do to HELP divorced and unwed families, there should be no mystery or delay about what they should STOP doing -- stop helping child abductors and others who would force a parent out of a child’s life.

Shocked by cheerfully ignorant, arrogant decision-making? Not if you've seen a judge learn family law on the job.

There was a lot of interest on social media in Jesse Singal's analysis of how President Trump deals quickly and authoritatively with issues he admittedly knows nothing about. Singal was thunderstruck at how monstrously dangerous it was to have major decisions made in cheerfully-admitted ignorance, by what the decision-maker thinks is simple common sense. But as a family law attorney, I really couldn't tell any difference between the President's performance and watching a judge who's new to Family Law, trying to puzzle out why the law seems to want both parents involved in a child's life after a breakup, why unwed fathers have the few rights they do have, etc. Or what the Hague Convention on child abduction is for, and what in the world is wrong with a mom taking her children halfway around the world just to get them far away from the father. Or the times I've watched Supreme Court Justices do the same thing as they debate the Hague Convention, or paternity law, assume the validity of wildly wrong speculations about what happens in custody litigation, and snort with equal contempt at the parents in these cases and the Congress that passed such seemingly pointless laws and treaties. Even experienced trial judges sometimes just reinforce their bias and irrational rules-of-thumb over time.

Here's the Trump version of this routine:

SHERIFF AUBREY: And the other thing is asset forfeiture. People want to say we’re taking money and without due process. That’s not true. We take money from dope dealers —

THE PRESIDENT: So you’re saying – okay, so you’re saying the asset-taking you used to do, and it had an impact, right? And you’re not allowed to do it now?

SHERIFF AUBREY: No, they have curtailed it a little bit. And I’m sure the folks are —

THE PRESIDENT: And that’s for legal reasons? Or just political reasons?

[Then-acting Attorney General Dana Boente]: I am aware of that, Mr. President. And we have gotten a great deal of criticism for the asset forfeiture, which, as the sheriff said, frequently was taking narcotics proceeds and other proceeds of crime. But there has been a lot of pressure on the department to curtail some of that.

THE PRESIDENT: So what do you do? So in other words, they have a huge stash of drugs. So in the old days, you take it. Now we’re criticized if we take it. So who gets it? What happens to it? Tell them to keep it?

MR. BOENTE: Well, we have what is called equitable sharing, where we usually share it with the local police departments for whatever portion that they worked on the case. And it was a very successful program, very popular with the law enforcement community.

THE PRESIDENT: And now what happens?

MR. BOENTE: Well, now we’ve just been given – there’s been a lot of pressure not to forfeit, in some cases.

SHERIFF AUBREY: You have to be careful how you speak, I guess. But a lot of pressure is coming out of – was coming out of Congress. I don’t know that that will continue now or not.

THE PRESIDENT: I think less so. I think Congress is going to get beat up really badly by the voters because they’ve let this happen. And I think badly. I think you’ll be back in shape. So, asset forfeiture, we’re going to go back on, okay? I mean, how simple can anything be? You all agree with that, I assume, right?

"Family Law Is Not 'Civil': The Faulty Foundation of

By Joseph A. Carrol, Dickinson School of Law

How to do unbiased, informed, competent coverage of a custody story

We started this blog because of journalism's abysmal failure to exercise basic skepticism, objectivity and diligence when covering family law, and especially hotly contested cases about children. So we are delighted to give credit where credit is due. This story reports the good and bad about both parents, but only as far as it goes, without making assumptions or just buying one parent's story wholesale. And yet it still tells you enough that you feel you know the story as well as anyone who wasn't involved in it could, but with a healthy recognition of, and respect for, the unknowns.

By Jacob Maslow in The Global Dispatch

-- Just one thing: "Custody Battle Nears End" is so often premature. Besides all the appeals, etc. that people can do in any court case, people can go back to court, claiming that something's changed, until the child turns 18. A few people will keep fighting after that, over collection of fee awards, disabled adult children, and other unusual issues.

My child was abducted and I didn’t realize it until I got him back. ...

In some cases, it's pretty simple. The child will still have two parents if one parent gets primary custody, but not if the other parent does. That factor does not outweigh some even more horrible things that sometimes happen to children, but it outweighs most other factors such as which parent and which home does some parenting tasks better, or is what the child is already used-to.

The Australian judge and lawyers in the story below described such a move as "drastic". But it's not that drastic, in my experience in the U.S. Changing custody requires first, a relevant, material change of circumstances, and then a wide-open evaluation of what's in the child's best interests under current conditions. That should include: what example do the parents set for the children about how to treat other people and what to prioritize? Should the children learn that alienating, vicious, deceptive borderline-personality behavior works to meet one's goals? Is it healthy for a parent to lie to kids about the other parent to manipulate their emotions? And most important of all, is it better to grow up with two parents, or one manipulative, shortsighted, selfish, immature parent?

One big caveat: When there are abuse accusations, the time to diagnose and counteract parental alienation is AFTER investigating and resolving the abuse issue. And alienation, likewise, should be proven before it's punished. Fortunately, in most cases it's obvious and the alienating parent doesn't try hard to hide it, and may even proclaim it.

BY KAY DIBBEN  in THE COURIER-MAIL, NOVEMBER 29, 2014
Subtitle: SELFISH separated parents who try to stop their children having a relationship with their former partners are having the kids taken off them by courts.
Caption: This is a warning that parents need to be child-focused in every parenting decision they make and not self-focused, says family law specialist Deborah Awyzio.
Read More

via The I CARE Foundation

Cruel realities of "parental" child abduction, 34 years later: stolen from one parent, abandoned by the other

This horrifying story has several elements that I have seen in my parental child abduction cases over the years. Especially, (1) the child was told that the left-behind parent had abandoned him, and (2) the child soon ended up without either parent. As I've seen in many cases, once the abductor has managed to deprive the other parent of  the child, he or she loses interest, other priorities intervene, and the child is left with relatives, friends, or worse.

This reverses the often-repeated speculation that most abductors are mothers. 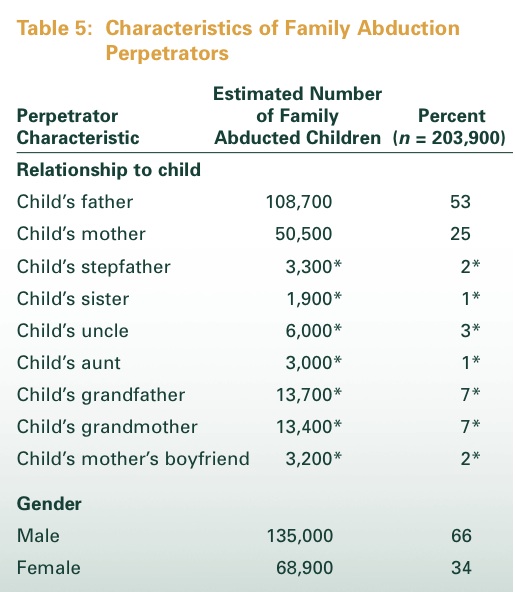