Home Archives Profile Subscribe
Brexitators All Googling "What's an EU" at Midnight Post-Vote? I Call BS on this Story: Let Me Count the Ways.
Trump will pay off national debt in shiny new Trumppence: Vote for your favorite design here.

"Brexit?" Wasn't that an obscure, apocryphal Anglo-Saxon saint? No? Well, a thousand years from now, it could be. A national savior like Arthur, Galahad, or Joan of Arc -- people won't remember exactly who or what he/she/it was, but they'll know for sure that back in the mists of the bad old days, all but lost to recorded history because everything was written or acted-out on little glowing electric screens, Jolly Old Brexit saved a unique nation-state so that its values could become a leading component of the modern world's values.

How? By non-violent resistance, refusing to remain clubbable with the bullying control-freaks of a bureaucracy-mad superstate, and voluntarily requesting ejection from their crazed and sadistic playhouse, whose inmates were indoctrinated to fear going outside. Then joining up with the bedraggled and disenfranchised nerds of EFTA, who had always refused to join the bullies' club but were thoroughly dominated due to their small numbers and individual puniness. Their once-mighty leader, Norway, had been downtrodden so long that at first he didn't even want to get up. And then, by using Britain's size and strength, and its willingness and ability to exit, as leverage to demand thorough changes to the Continentals' club, inviting those still inside to play by civilised rules, to form a more perfect union that still partook of each member's unique strengths but also respected the self-restrained, ordered liberty of nations and individuals. An association that only used force, rule-making and standardization as if they were necessary evils, and only when necessary for safety,  transparency, and such mutual intelligibility as honest trade requires. Instead of proliferating them for their own sake, to build up power, to show that all economic activity was subservient to the whims and plans of the rulers, to demoralize anyone who might dream of freedom.

Scholars of that epoch will generally agree on this much: that "the real-world actions of this mysterious Saint Brexit were among those that were allegorized, around that same time, in the tales of Saint Winnie, AKA 'The Pooh', and his sidekick Saint Piglet, particularly in 'In Which Tigger is Unbounced'. In which Rabbit -- thought to symbolize either the nameless, faceless Ee-Yoo Emperor, or maybe Britain's gifted, benevolent, but vain and snobbish friend President Obama -- manipulates pureheartedish but simpleish Prime Minister Piglet to help hatch his Cunning Plan." 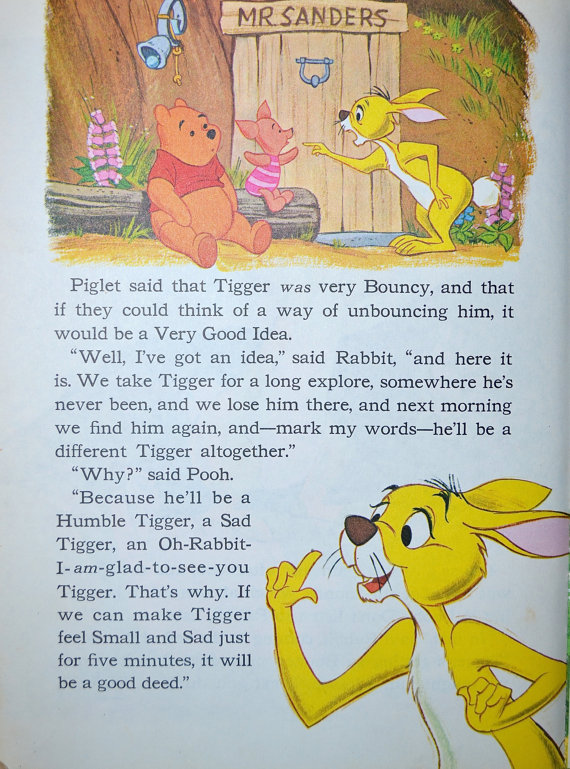 "But the enduring good-natured vigour of Britain, represented by the Spirit Animal 'Tigger', turns out to be too pure, too socially-responsible in its own voluntaristic way, to be housebroken into fearfulness and dependence by such devices. In his vain desperation to make his power-play succeed even when it clearly has been suffering reversal after reversal, Rabbit falls into his own trap, and is rescued, reformed and reintegrated into the community by Tigger, in a far nicer and healthier way than Rabbit had arranged for Tigger:" 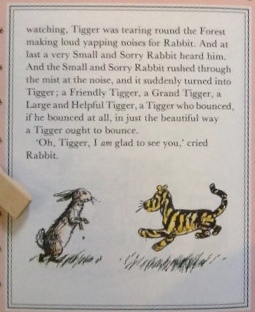 [Though Milne makes all this obvious enough, for more academic Explaining of it see Niall Nance‐Carroll, “A Prosaics of the Hundred Acre Wood: Ethics in A. A. Milne's. Winnie-the-Pooh and The House at Pooh Corner” (2014), in Mills, Ethics and Children's Literature, starting at p. 89.]

This certainly might not happen. But it could. It should. Its chances are good!

Who will do it?

Though the Brexit voters probably cared much more about immigration, the politicians who are currently in the government or in the governing party, and who will implement the Brexit, and lead the replacements and renegotiations of various components the EU relationship, are free-trade globalists who expressed far more concern about over-regulation, sovereignty and accountability than about immigration.* (Farange is not in government, as he's in UKIP. And Boris Johnson or another Leaver Tory would normally succeed Cameron as PM via a party conference, not a general election.) Yes, they will need to do something honestly, seriously and carefully designed to maintain control over immigration, but as long as they make that real effort, they'll have great leeway, and great support, for finding a smart, tough-minded way to preserve the benefits of trade without completely kowtowing to Brussels. They will be driven to preserve and improve the free-trade regime by three powerful factors, which will all push in the same direction:

What they need to do:

The details are full of devils, but in the big picture, the UK needs to maintain and expand free trade, and ideally should not only escape from, but dismantle or at least free other countries from, the EU's stifling powers and habits of overregulation. Brussels's legal power to overregulate within the EU, and its effective bargaining power to dictate the same overregulation to other countries. The UK and other non-EU or EU-exiting nations should use their new leverage to create stronger, less regulation-burdened free-trade agreements with the EU and with each other.

The problem we start with is that the EU is the flagship of globalist liberalism and yet, in its current form, it fetishizes and crusades for illiberalism on two great issues: (a) regulations so numerous and sometimes pointless as to stifle commerce and productivity and demean human dignity, and (b) oligarchic, dissent-proof elitist pseudo-consensus not only in everyday practice, but also as the ultimate source of political legitimacy, and as the standard to measure what claims can be taken seriously, what is moral, adult and responsible, what is anti-social, hateful, psychotic, etc.

Now, elitism is too widespread and deep for the ministers to address in the immediate work of Brexitage that has to be done. But Brexit allows and requires Britain to free itself from the EU's extreme regulatoriness, a flaw that fatally and blatantly negates the entire globalist, liberal idea that the EU symbolizes. This great federation, created to secure "the Four Freedoms, ... the free movement of goods, capital, services and persons," was taken over, from the beginning, by the opponents of economic freedom. Or maybe it's more accurate to say the rhetoric and banners of freedom were taken over circa 1990 by the Mandarins of an existing EEC that had been started for basically unrelated geopolitical purposes, in an earlier age when there was little understanding of economic freedom. (Even its statement of the Four Freedoms curiously and significantly leaves out the most important feature of free economies: free individual economic actors voluntarily contracting. Instead, it speaks of abstract goods, capital, services and persons just moving around, not specifying whether they're just spontaneously going to wherever there is a need, being dispatched there by socialist central planners, or actually being freely bought and sold by people without any state officiousness.) Anyhow, what better way for regulation enthusiasts to secure their own agendas than by being in charge of the day-to-day implementation and interpretation of everyone's economic freedoms and free trade?

In practice, the founding principle, that an economic activity and actor that's permitted in one state will be permitted in all, has brought in its sinister corollary, that any economic activity is forbidden until it is expressly permitted. One of the "prerequisites" to realizing the Four Freedoms is "the harmonization of laws and standards". Rather than a calling to work to minimize restrictions, this is taken as an invitation to impose elaborate regulations on everything, impose one country's desired restrictions on all the other countries, and then self-congratulate for making them uniform and thus making compliance simpler for business than it would be if there were some countries that offered the businesses and consumers more freedom to vary from the pickiest countries' norms. The otherwise very encouraging interim report on the US-EU TTTP negotiations emphasizes that even when extending this process overseas, it will be "a regulatory race to the top rather than a race to the bottom."

Why they'll be able to do it:

Critics of the "Norwegian" alternative -- it's actually the European Free Trade Association (EFTA), once bigger than the EU's predecessor, the EEC, and has lost some major members to the EU but now also includes Switzerland, Iceland and Liechtenstein and has free-trade agreements or negotiations with most major economies -- say that Norway still is forced, by the treaties that give it free trade with the EU, to separately approve and abide by the EU regs, and also that as a non-member it has no power in making them. But there are three important flaws in this argument:

1. The UK has only a small part in the EU's government, and of all the regulatory horror stories that have appeared since the early 1990s, I have never heard anything about the UK having lobbied for any strict regulation, nor for it successfully or seriously pressing to ease any such regulation.

2. Norway doesn't have to swallow all the regs. According to Vox Explainers's deep and evenhanded "Brexit: 9 questions you were too embarrassed to ask",

To gain preferred access, Norway is required to adopt many EU regulations. A recent British government report found that "Norway has adopted three quarters of the EU’s rules and legislation."

Well, three quarters of them are probably just fine. Maybe what counts is that Norway, and Great Britain, don't have to agree to all the regulations. And maybe they won't agree to the ridiculous-sounding ones, which provide great argument points against the whole EU enterprise but which also demean the UK and its people so long as the answer to any complaints remains that "resistance is useless."

3. Leverage and dynamic change. Britain's size and wealth, and its leaving, give it unprecedented leverage to negotiate less-regulated free trade; to collectively bargain with EFTA, EFTA's major free-trade partners, the US, and Australia against the EU's long-arm regulations; and maybe even to fundamentally change the EU's illiberal nature, or to attract more EU members to a souped-up EFTA that would begin to take the EU's place. Brexit likewise greatly increases EFTA's and the US's leverage against the EU.

The official report on the US-EU TTTP negotiations -- the ones President Obama talked about when he sneered that the UK would have to go "to the back of the queue" and wait for years before US diplomats would talk trade with it -- actually describe a negotiation framework which would easily include the UK and EFTA, based on a comprehensive vision that all free trade deals should be accompanied by practical harmonization of all trading partners' regulations on any given subject. Adding additional free agents -- who'll remain free to cut their own deals with us -- to these kinds of negotiations could make them go faster and in the less-regulated direction the US says it wants.

The condescending naysayers' arguments wrongly assume that the EU will remain as strong and arrogant as it was before, and that the UK will be as isolated and powerless as Norway has lately been as "the great power in the Oslo–Reykjavik–Vaduz axis". But that's not how it works. That's not how any of this works. When you change something, its context and environment change, too. Neither great nor low expectations should be unreflectingly based on the conditions before the change.

*[But for an astute libertarian argument that the Brexiters and Brexit are and will be illiberal, see "The Case for the UK staying in the EU" by Barry Stocker at Notes on Liberty. But even that calculus may shift as the question changes from whether to how.]

The comments to this entry are closed.