"Learned Helplessness" is poisoning this election and our character, left and right

In the conservative-populist revolution of the very late 1970s and the 1980s, conservative poor and middle-class whites were portrayed as self-respecting, too proud to take handouts, proud of their productive work, and rejecting the "victim/consumer" culture of the 1970s. As the 80s went on and as I grew up in a close extended family that was mostly in the building trades and stayed close to its rural roots, I was really disturbed to see so many of them spouting "conservatism" in a way that actually embraced the "victim" role -- seeing themselves as almost powerless and, even more disturbingly, not feeling at all responsible for anything their government did, for how it treated other kinds of Americans, or for how their own increasingly childlike, self-absorbed attitudes might affect minorities.

I think that to participate in civic life it's essential to feel that sense of responsibility, that your government represents you, and you're morally responsible for how its actions affect all Americans and the rest of the world, even while accepting that you only have a very little power over it and the democratic system usually won't enact exactly what you want. And that as an adult -- and it helps to think this way even as a child -- it isn't OK to say racist and xenophobic stuff just because it makes you feel good, resists political correctness, or gives you nostalgia for the days of your childhood even if some things were better then.

I've hardly ever seen these points made this way. But J.D. Vance talks eloquently about this and a whole lot more in an interview about his new book Hillbilly Elegy: A Memoir of a Family and a Culture in Crisis:

"The meta-narrative of the 2016 election is learned helplessness as a political value. We’re no longer a country that believes in human agency, and as a formerly poor person, I find it incredibly insulting. To hear Trump or Clinton talk about the poor, one would draw the conclusion that they have no power to affect their own lives.

"... Mamaw recognized that our lives were harder than rich white people, but she always tempered her recognition of the barriers with a hard-noses willfulness: 'never be like those a–holes who think the deck is stacked against them.'

"...Believing you have no control is incredibly destructive, and that may be especially true when you face unique barriers."

Kochs: Don't rejigger the Party; educate the public about freedom, & the Party'll take care of itself

". . . They appear to have taken different lessons from the 2016 primaries, however. Singer wants to remake the party; the Kochs want to re-educate the electorate. The Kochs, for instance, have little appetite for the minutiae of the RNC platform committee that Dickerson was fighting over. “We could care less,” said a person intimately familiar with the Koch network. “It’s not what we do.”

“We are not trying to move the party,” said Frayda Levin, a major donor and the chair of the board of directors of Americans for Prosperity, one of the biggest arms of the Koch network. “We believe freedom lies, as Thomas Jefferson said, in an educated public and, for the most part, the party will reflect what they believe the American people want. We have to start with the constituency.” . . .

Weld compared the Republican Party, in its crisis over Trump’s nomination, to the Whig Party in its final years. The Whig Party splintered in the mid-eighteen-fifties, Weld noted, and some former members drifted into the anti-immigrant Know-Nothing Party. Like Trump’s rallies, Weld said, Know-Nothing rallies “had a lot of violence, they fomented a lot of conspiracy theories about people trying to overthrow the United States. They were nativists ... they were everything that Mr. Trump’s overtones are today. And they became very powerful for a few short years, and then they disappeared.”

The third-party candidacy of Gary Johnson might make the most unpredictable election in modern times even weirder.

Trump will pay off national debt in shiny new Trumppence: Vote for your favorite design here. 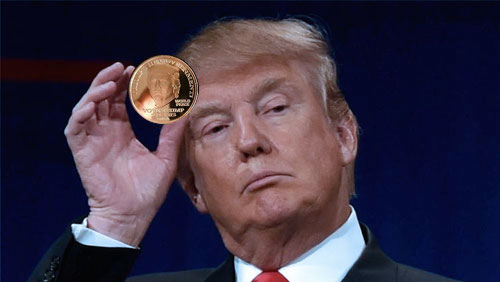 Please vote for your favorite in the Comments section.

A dual-currency system would keep our

precious dollars at home while providing shiny new and possibly collectible Trumppence to the Red Chinese and other low-energy bond investors. But

would that make our dollars worth more, or worth less?

And can the Trumppence ever hope to compete with these actual United Kingdom Fiftuppences? 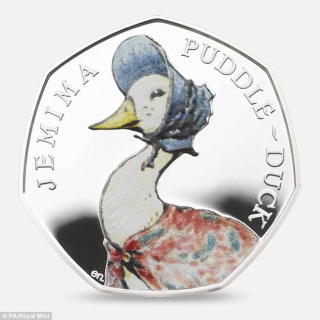 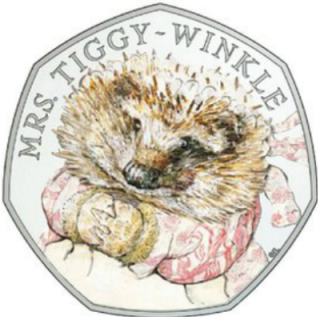 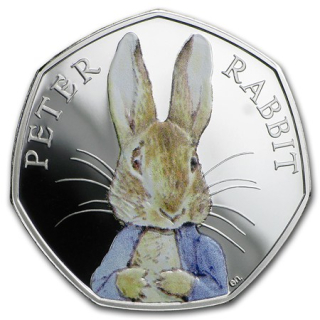