Hillary rejects Bill's economic policies that made his time prosperous

Willingly or not, Bill Clinton presided over mildly free-market policies and welfare reform. The federal budget grew during his time but shrunk as a share of the economy. Federal deficits were reduced, then eliminated and turned into surpluses. He was enthusiastically for free trade. His very early attempt at an artificial "stimulus" was defeated, with money instead going where it was actually wanted, needed, and productive of things consumers valued and could afford. Hillary is rejecting all of that, as we saw in the first debate, Peter Suderman writes in Reason:

Hillary Clinton Wants the Economy of the 1990s Without Its Policy Agenda:

Posted at 11:57 AM in Economics, History, Original Composition - Not Just Links | Permalink | Comments (0)

Is the WASHINGTON Post right to ding Trump for race speech in city named for big slaveowner?

"It’s worth noting ...  that the North Carolina town Trump spoke in was named for a man from a slaveholding family,"  Elise Viebeck wrote in the Washington Post last week about Trump's speech about Black Americans in Kenansville, N.C., reiterating what the Post's Jose DelReal had written the day before.

But ... those places weren't named for those guys BECAUSE of their slaveowning or slave-trading. Well, neither was Kenansville. What -- you thought they named it for Kenan when he made it into Slaveowner Magazine's annual "Top 40 Slaveowners" feature? Actually, James Kenan was an early leader of Stamp Act protests and the prewar Committees of Safety, a state militia general, sheriff, state senator, and state-constitution convention delegate. He was also a delegate to a 1774 provincial convention that banned the slave trade. In the state's U.S. Constitution ratifying convention, he chaired the crucial "committee of the whole" that studied debated, and put together the final Report on the Constitution, amendments, and on the dicey, crucial question of how to hold out for what became the Bill of Rights without abandoning the Union.

Just goes to show, you can be as right and pure and as good as they come and your opponent may be every depraved varmint in "Would You Like to Swing On a Star" rolled into one, but just shoot one cheap shot from your glass house, and that's all that some people will focus on, completely devaluing and discrediting all your valid arguments, and it'll all come down to this:

Sick Hillary debates bearded manchild from "The Hangover" -- You've never seen her like this before.

Here's how Hillary dealt with "Hangover" breakout star Zach Galifianakis's bizarre, improvised interview questions on his talk show, "Between Two Ferns", in which he's pretty much the same guy he plays in the "Hangover" movies. Except she was pretty sick with pneumonia at the time, as you may have heard, and "There was a laugh or two from her – a really big laugh – that we had to edit out because it wasn’t icy enough for us in a weird way ...", Galifianakis told the Los Angeles Times.

If we send Hillary to the Oval Office, she had better have her lucky ferns flanking her at all times, like her Haldeman & Erlichman, her Rosenkrantz & Guildenstern, her Stan & Huma ...

Galifianakis doesn't plan to have Donald Trump on the show, he continued:

"He’s the kind of guy who likes attention – bad attention or good attention. So you’re dealing with a psychosis there that’s a little weird. I wouldn’t have somebody on that’s so mentally challenged. I feel like I’d be taking advantage of him. And you can print that."

I guess Trump will just have to talk to Mr. Chow.

Right & Left define the issues differently, & those who 1st raise them do so as tactics toward more distant goals

I know this column by Jeffrey Varasano is accurate -- even though the web site where Christoper Buckley found it looks sketchy -- because in college I worked closely with the people he's describing and heard their reasoning first-hand.

"Republicans think that the battle with the left is over issues like these:

(But)... these are debated WITHIN a constitutional system. This is the game on the surface. The left is playing on a different level. They are not debating policy within the system, they are trying to alter the system itself.

The REAL game is a list of issues about the system itself. This second list shows a much deeper level of understanding of the left and it’s tactics - a reality that many on the center right won’t name or acknowledge. The right mocks the left because they can’t call Islamic Terrorism, Islamic Terrorism, and then we turn around and won’t use the correct words to label leftism. These issues are not what’s debated in the mainstream media, but what leftist activists debate and study among themselves. How many of these terms are elected republicans familiar with? Not just a dictionary definition. If I asked republican officials to explain these terms and what they mean to the left and how this affects their strategy and tactics and how they relate to one another, could these officials do so without further research?

For example, Gay marriage appears to be an issue of Civil rights - an end in and of itself. But actually to the hard left, it's a an issue of Critical Theory and Social Justice. Not an end, but a tactic of attack against the foundations of the Republic.

So, no I don't blame Trump for not knowing this. I think dozens of friends of mine on facebook could answer a quiz on the above topics better than EVERY elected republican in congress.

But whereas they all cave to it, Trump instinctively fights back. Not intellectually, but on a gut level that he's on the right side."

– From "DEAR GOP: This Is WHY We Lose – We Don’t UNDERSTAND The Left’s ‘Game’", By Jeffrey Varasano on Clash Daily, via Christopher Buckley

If you saw the headline you may have thought, as I did, that it was a vague hook about something that probably amounted to nothing ("CBS News Edits Out Embarrassing Verbal Slip"). Well, it's not nothing, it's big. CBS, in its broadcast, removed Bill's first and most revealing answer and retraction, changing “frequently—well not frequently, rarely”  to simply "rarely". The full sentence and other context are in CBS's article about the interview:

“Well if it is, it’s a mystery to me and all of her doctors,” he said, “because frequently—well not frequently, rarely—but on more than one occasion, over the last many, many years, the same sort of thing happened to her when she got severely dehydrated.”

Sorry, if anyone, but ESPECIALLY Bill Clinton, says something like, "frequently, I mean rarely, multiple occasions, but I mean over many many years", the public deserves to hear all of that and decide for themselves which parts to believe, which part of his teeming brain to listen to as its more and less honest and dishonest hatchlings jostle and trample each other in the rush for his mouth. The guy is a master: he really doesn't hardly ever lie, he talks in a way that makes you want to believe he's totally on your side, and to stop listening before he gets through all of the qualifiers and reversals at the end of the sentence, but you have to doggedly listen to all that while reserving all judgment on what impression to form, or you'll misunderstand him every time. So if you ever take a jot or a tittle out of one of his sentences, you'll change the meaning a hundredfold.

Depressing that this was with Charlie Rose. Rose gives every impression of setting the gold standard for thoughtful, nuanced discourse and intellectual honesty that brings everyone together around his table. "Talking with Charlie Rose" is almost a sacred rite, even more so than testifying to a court under oath on penalty of perjury. 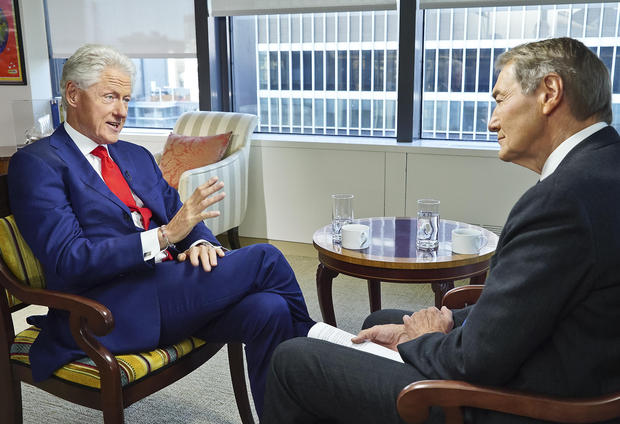 I may have only clicked on the story because the part of the article that showed up in Facebook's link had a word missing, and I have a pet peeve about people who leave mistakes uncorrected when they are criticizing someone else's minor wording mistake or writing about how important good grammar is. But that typo had been fixed in the article although it remains in Facebook's display, and it wasn't in an article about a trivial mistake, as it turns out.

By Alex Griswold on mediaite.com

By Chuck Ross on The Daily Caller. (The key part of the story is "below the fold" -- or rather below the ribbon of "Sponsored Content" ads.)

By Brandon Morse on redstate.com

One serious caveat and one quibble:

1. Abe's criticisms of the two leading candidates are indeed hilarious and pungent, but all his arguments against Hillary are about how she's "crooked" -- nothing about her ideology. She originally achieved mass unpopularity because of how far left she was, and it's really worrisome that things have shifted so far left that that's no longer a safe line of attack. I just can't see liberals caring much about the kinds of "crooked" stuff she has plausibly been accused of.

2. Abe wasn't exactly a third partier -- he was a Whig until the Republicans formed in the wake of the Whigs completely breaking down and fracturing. But it's a valid point that even political parties aren't forever: they can die like the Federalists and then the Whigs, and new ones can form and become major parties, like the Whigs and then the Republicans.

Posted at 11:58 AM in History, Media, Original Composition - Not Just Links | Permalink | Comments (0)

Gary Johnson is no libertarian purist. That's normal, for a serious candidate of a real party.

My friend Woody Wood, a textile lobbyist, and I were pondering our presidential choices. When we came to Johnson, he said he said something like, "Well, in a purely, perfectly, libertarian society,  . . . "

I can't tell you the rest of what he said, because it started me thinking -- we don't refuse to consider liberal or conservative candidates because of what we imagine pure liberalism, or pure conservatism, might be. Indeed hardly any of us even try to imagine those things, because they're so unlikely they're irrelevant. We vote for parties and candidates to move the ball in our preferred direction, not to go all the way with it. And sometimes our vote is more for the party, or for a particular wing of the party, than for our ideal candidate.

Johnson and Weld are pretty great candidates with a lot of experience in and out of government, but neither of them is libertarian on everything, any more than I am. But that means the Libertarian Party is maturing into a real, functioning, electoral political party, just when the Republican Party seems to have entered its second childhood -- OK, to be frank, it entered it somewhere around the Palin nomination and now with the Trump nomination its aging process has left the cute codger phase and gone into the nasty, belligerent, feces-flinging throes of full-blown senile dementia, the kind where you no longer recognize your friends and relations, and invest all your hope and trust into intimate, intricate imaginary relationships with strangers or people who don't even exist.

Anyhow, back to the serious candidates and parties. Jack Hunter spells out all the ways in which --

By Jack Hunter on rare.us

Posted at 11:36 AM in Original Composition - Not Just Links, Timeless | Permalink | Comments (0)