I already knew Civil Asset Forfeiture was often horribly misused and somehow started affecting people who hadn't been convicted of crimes. But people who aren't even charged? In some places, it has taken America back to the bad old days where it isn't safe to travel if you're a minority or from out-of-state. Worse, some counties have become like those corrupt third-world countries where there's no real difference between cops & robbers; bribes & "fines". Where innocent travelers might get stopped at any time for a bogus crime and have to sign over whatever cash they have with them to get out of jail and -- a particularly American twist on this barbarity -- to not have their children taken away.

And sometimes, as described below, public servants are so focused on grabbing the cash etc. that when they do stop actual, serious drug-runners, they let them go, as long as they literally "get the goods" off them.

There have been bipartisan efforts in many states, most recently Virginia, to reform "civil forfeiture" so it only applies to convicted criminals. (If something's actual evidence of a crime that someone's charged with, it would still be kept temporarily as evidence anyway.) But what this New Yorker article has to say makes it far more urgent than I knew.

TAKEN: Under civil forfeiture, Americans who haven’t been charged with wrongdoing can be stripped of their cash, cars, and even homes. Is that all we’re losing?

By Sarah Stillman in The New Yorker

Us kids of the 70s uncomfortably recall all the plain-vanilla TV and movie characters who merely "happened to be black". Perhaps none was plainer-vanilla than Franklin from Peanuts. But it turns out our discomfort was shared by their creators, even when they were considering whether to introduce them. And it was answered powerfully by moon-lander designer and housing discrimination activist Kenneth C. Kelly, who wrote to Charles Schulz after hearing that Schulz was considering adding a Black Peanuts kid but was worried about "patronizing" tokenism:

"... on the subject of including Negro kids in the fabric of Peanuts, I’d like to express an opinion as a Negro father of two young boys. You mention a fear of being patronizing. Though I doubt that any Negro would view your efforts that way, I’d like to suggest that an accusation of being patronizing would be a small price to pay for the positive results that would accrue!

"We have a situation in America in which racial enmity is constantly portrayed. The inclusion of a Negro supernumerary in some of the group scenes in Peanuts would do two important things. Firstly, it would ease my problem of having my kids seeing themselves pictured in the overall American scene. Secondly, it would suggest racial amity in a casual day-to-day sense.

"I deliberately suggest a supernumerary role for a Negro character. The inclusion of a Negro in your occasional group scenes would quietly and unobtrusively set the stage for a principal character at a later date, should the basis for such a principal develop.

"We have too long used Negro supernumeraries in such unhappy situations as a movie prison scene, while excluding Negro supernumeraries in quiet and normal scenes of people just living, loving, worrying, entering a hotel, the lobby of an office building, a downtown New York City street scene. There are insidious negative effects in these practices of the movie industry, TV industry, magazine publishing, and syndicated cartoons."

From "Why Charles M. Schulz Gave Peanuts A Black Character (1968)" by Paul Sorene on flashbak.com 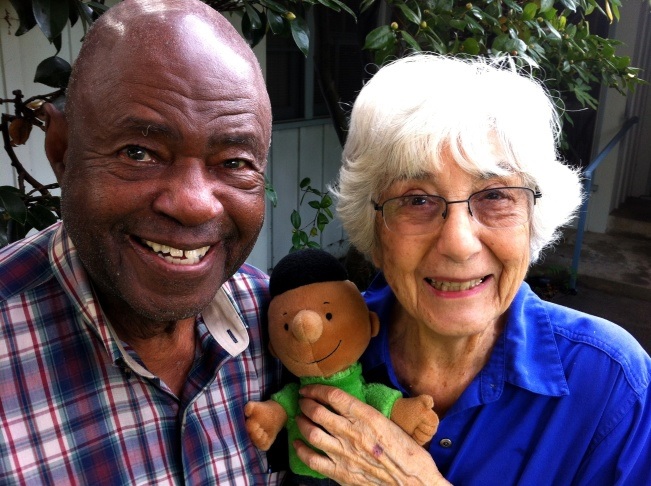 Kenneth C. Kelly with Franklin and Franklin advocate Harriet Glickman, above, and profiled in Ebony, Dec. 1962, below 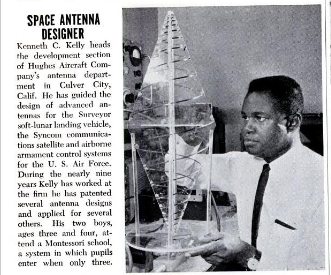 The judgments Dr. Kelly expressed in his letter were also at the core of his housing rights work, as this excerpt from a 1973 article from the Van Nuys News [bad scanning and all] shows:

"Two of Southern California's biggest residential developments were accused in federal court yesterday of fostering housing discrimination by depicting only white persons in their advertising. . . . Twin suits brought by organizations called fair housing councils charged that pictures of blacks and o t h e r minorities were "systematically excluded" from sales brochures and newspapers and magazine ads, thereby subtly conveying a message that blacks were unwelcome. A spokesman for the Irvine Co. said "we may not have been sensitive" to the issue raised in the suit and said advertising would be changed to meet the complaints. He said the company has vigorously pursued a policy of open housing and was surprised at being named in such a suit.
"NAACP Council
"The suit over advertising for the development known as Irvine Villages was filed by the Orange C o u n ty Fair Housing Council. The suit against Westlake was filed by the San Fernando Valley Fair Housing Council. Attorneys in both cases were supplied by the NAACP Legal Defense and Education Fund. Identical issues were raised in both, namely that by depicting only white families the ads tended to discourage blacks and other non-Caucasians from trying to buy homes in the developments. Discrimination in real estate sales and rentals is prohibited by state and federal civil rights acts.
"Recalls Past
"Amplifying on the issues raised in the suits, Kenneth C. Kelly, of the San Fernando Valley Fair H o u s ing Council, told newsmen: "We believe that the advertising has the effect of keeping alive within most minority persons those feelings that were inculcated during the many decades in which rank and brutal discrimination against minority persons w e r e almost the rule a m o n g housing developers' sales staff.. . . . "